Sophos has released details of a new ransomware written in Python that attackers used to compromise and encrypt virtual machines hosted on an ESXi hypervisor. The report details a sniper-like operation that took less than three hours to progress from breach to encryption. 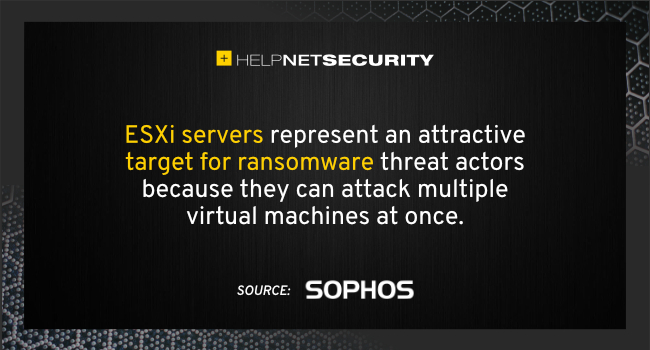 “This is one of the fastest ransomware attacks Sophos has ever investigated and it appeared to precision-target the ESXi platform,” said Andrew Brandt, principal researcher at Sophos.

“Python is a coding language not commonly used for ransomware. However, Python is pre-installed on Linux-based systems such as ESXi, and this makes Python-based attacks possible on such systems. ESXi servers represent an attractive target for ransomware threat actors because they can attack multiple virtual machines at once, where each of the virtual machines could be running business-critical applications or services. Attacks on hypervisors can be both fast and highly disruptive. Ransomware operators including DarkSide and REvil have targeted ESXi servers in attacks.”

The investigation revealed that the attack began at 12:30 a.m. on a Sunday, when the ransomware operators broke into a TeamViewer account running on a computer that belonged to a user who also had domain administrator access credentials.

According to the investigators, 10 minutes later, the attackers used the Advanced IP Scanner tool to look for targets on the network. The investigators believe the ESXi Server on the network was vulnerable because it had an active Shell, a programming interface that IT teams use for commands and updates. This allowed the attackers to install a secure network communications tool called Bitvise on the machine belonging to the domain administrator, which gave them remote access to the ESXi system, including the virtual disk files used by the virtual machines. At around 3:40 a.m., the attackers deployed the ransomware and encrypted these virtual hard drives hosted on the ESXi server.

“Administrators who operate ESXi or other hypervisors on their networks should follow security best practices. This includes using unique, difficult to brute-force passwords and enforcing the use of multi-factor authentication wherever possible,” said Brandt.

“The ESXi Shell can and should be disabled whenever it is not being used by staff for routine maintenance, for instance, during the installation of patches. The IT team can do this by either using controls on the server console or through the software management tools provided by the vendor.”

The following standard best practices are recommended to help defend against ransomware and related cyberattacks.

At a strategic level

Deploy layered protection. As more ransomware attacks begin to involve extortion, backups remain necessary, but insufficient. It is more important than ever to keep adversaries out in the first place, or to detect them quickly, before they cause harm. Use layered protection to block and detect attackers at as many points as possible across an estate.

Combine human experts and anti-ransomware technology. The key to stopping ransomware is defense-in-depth that combines dedicated anti-ransomware technology and human-led threat hunting. Technology provides the scale and automation an organization needs, while human experts are best able to detect the tell-tale tactics, techniques and procedures that indicate an attacker is attempting to get into the environment. If organizations don’t have the skills in house, they can enlist support from cybersecurity specialists.

At a day-to-day tactical level

Monitor and respond to alerts. Ensure the appropriate tools, processes, and resources (people) are available to monitor, investigate and respond to threats seen in the environment. Ransomware attackers often time their strike during off-peak hours, at weekends or during the holidays, on the assumption that few or no staff are watching.

Set and enforce strong passwords. Strong passwords serve as one of the first lines of defense. Passwords should be unique or complex and never re-used. This is easier to accomplish with a password manager that can store staff credentials.

Use Multi Factor Authentication (MFA). Even strong passwords can be compromised. Any form of multifactor authentication is better than none for securing access to critical resources such as e-mail, remote management tools and network assets.

Lock down accessible services. Perform network scans from the outside and identify and lock down the ports commonly used by VNC, RDP, or other remote access tools. If a machine needs to be reachable using a remote management tool, put that tool behind a VPN or zero-trust network access solution that uses MFA as part of its login.

Practice segmentation and zero trust. Separate critical servers from each other and from workstations by putting them into separate VLANs as you work towards a zero-trust network model.

Make offline backups of information and applications. Keep backups up to date, ensure their recoverability and keep a copy offline.

Inventory your assets and accounts. Unknown, unprotected and unpatched devices in the network increase risk and create a situation where malicious activities could pass unnoticed. It is vital to have a current inventory of all connected compute instances. Use network scans, IaaS tools, and physical checks to locate and catalog them, and install endpoint protection software on any machines that lack protection.

Make sure security products are correctly configured. Under-protected systems and devices are vulnerable too. It is important that you ensure security solutions are configured properly and to check and, where necessary, validate and update security policies regularly. New security features are not always enabled automatically. Don’t disable tamper protection or create broad detection exclusions as doing so will make an attacker’s job easier.

Audit Active Directory (AD). Conduct regular audits on all accounts in AD, ensuring that none have more access than is needed for their purpose. Disable accounts for departing employees as soon as they leave the company.

Patch everything. Keep Windows and other operating systems and software up to date. This also means double checking that patches have been installed correctly and are in place for critical systems like internet-facing machines or domain controllers.