DTEX Systems announced the release of a report which identifies a significant increase in industrial espionage incidents and the rise of the super malicious insider persona, and provides evidence that the abrupt shift to remote work has directly contributed to an escalation in psychosocial human behaviors that create organizational risk. 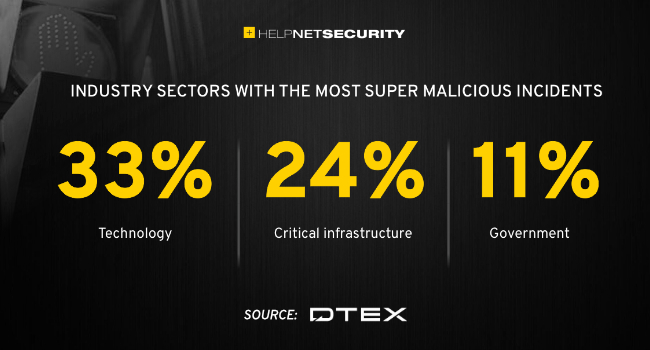 The rise of malicious insider incidents

For more than a decade, insider threats have been categorized as either malicious, negligent or compromised. Based on the findings, a fourth persona has emerged—the super malicious insider. The super malicious insider is a technically proficient employee who is acutely aware of an organization’s cyber security architecture, solutions, and processes and who understands both the technical and human analyst limitations in detecting insider threat indicators.

“If any company thinks they don’t have an insider risk problem, they aren’t looking,” said Rajan Koo, Chief Customer Officer and DTEX Lead with DTEX Systems. “The addition of the super malicious persona in this year’s report provides a wake-up call that traditional cyber security tools, such as DLP, UBA, and UAM, are actively being avoided or circumvented by those with sufficient technical skill and malicious intent.”

“While the increase in the amount and impact of insider risk occurred across industries, we found that it is most concentrated in technology and critical infrastructure at 33% and 24%, respectively,” said Armaan Mahbod, Director of Security and Business Intelligence, Counter-Insider Threat at DTEX. “The risk to critical infrastructure entities in the Five Eyes nations is especially significant as any compromise can be damaging to the national security of these countries and the safety and well-being of its citizens.”