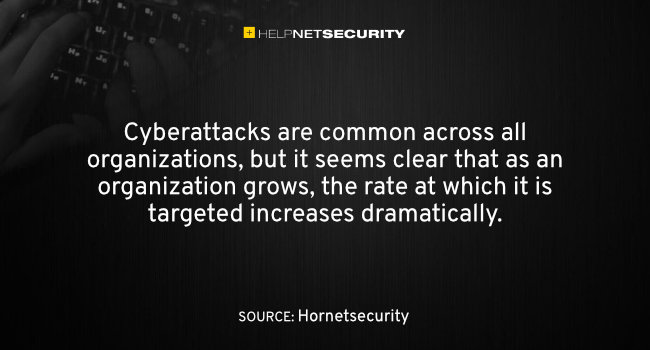 Overall, it was found that 3 in 10 organizations (29.2%) using Microsoft 365 reported a known security incident in the last 12 months.

What do IT security professionals say?

Experts at Hornetsecurity say that these finding could be due to a number of factors. They point to the likelihood that organizations with a high number of implemented security features have done so as a result of sustained cyber-attacks over a period of time, in an attempt to mitigate security threats.

Another theory is that making use of more features may contribute to a false sense of security within the organization. This could lead it to stop paying close attention to potential security threats, believing that all these features will keep them safe without having to make additional active effort.

“It’s a game of cat and mouse. As you grow, you add security features, but you also become more susceptible to attack because you are a more lucrative target. Yet, you have to stay ahead of the criminals trying to harm your organization. The results of our survey made clear that relying on stock security features for digital safety is insufficient,” said Daniel Hofmann, CEO at Hornetsecurity.

“Organizations must proactively find ways of identifying unseen vulnerabilities and should take a diligent, holistic approach to cybersecurity, rather than relying on what is available out of the box and only reacting once it is too late.”

The number of security incidents is related to company size

18.5% of companies with 1 to 50 employees have been the target of an IT security-related incident in the last year. While that is a worryingly high incidence rate, it is by far the lowest among all size categories documented in this survey.

This trend clearly shows that cyberattacks are common across all organizations, but it seems clear that as an organization grows, the rate at which it is targeted increases dramatically. Security efforts made while a company has less than 500 employees are evidently not enough to protect organizations as they grow beyond that number.

What are the roadblocks to implement security features in their organizations?

Surprisingly, 25.7% of respondents that employ over 50 people and have compliance requirements neither employ a dedicated compliance officer nor a dedicated IT security officer. Several factors contribute to a lack of attention to IT security and compliance in medium to large organizations.

62.6% of IT professionals indicate that ‘not enough time or resources’ is the main roadblock to implementing security features within their organization. Following this, respondents cite a ‘lack of budget’ (44.6%), ‘skilling issues and/or a lack of knowledge’ (36.2%) and a ‘lack of interest from management’ (23.1%).

All of the above results indicate a general lack of urgency surrounding security within organizations. Only 2% of respondents indicated that they have no roadblocks with regards to security, and over half of respondents (55.5%) said that their organization does not have a change tracking and review process in place – a vital tool for the identification of security threats.