The Sandworm Team hacking group is part of Unit 74455 of the Russian Main Intelligence Directorate (GRU), the US Department of Justice (DoJ) claimed as it unsealed an indictment against six hackers and alleged members on Monday.

“These GRU hackers and their co-conspirators engaged in computer intrusions and attacks intended to support Russian government efforts to undermine, retaliate against, or otherwise destabilize: Ukraine; Georgia; elections in France; efforts to hold Russia accountable for its use of a weapons-grade nerve agent, Novichok, on foreign soil; and the 2018 PyeongChang Winter Olympic Games after Russian athletes were banned from participating under their nation’s flag, as a consequence of Russian government-sponsored doping effort,” the DoJ alleges.

“Their computer attacks used some of the world’s most destructive malware to date, including: KillDisk and Industroyer, which each caused blackouts in Ukraine; NotPetya, which caused nearly $1 billion in losses to the three victims identified in the indictment alone; and Olympic Destroyer, which disrupted thousands of computers used to support the 2018 PyeongChang Winter Olympics.”

At the same time, the UK National Cyber Security Centre says that they asses “with high confidence” that the group has been actively targeting organizations involved in the 2020 Olympic and Paralympic Games before they were postponed.

“In the attacks on the 2018 Games, the GRU’s cyber unit attempted to disguise itself as North Korean and Chinese hackers when it targeted the opening ceremony. It went on to target broadcasters, a ski resort, Olympic officials and sponsors of the games. The GRU deployed data-deletion malware against the Winter Games IT systems and targeted devices across the Republic of Korea using VPNFilter,” the UK NCSC said.

“The NCSC assesses that the incident was intended to sabotage the running of the Winter Olympic and Paralympic Games, as the malware was designed to wipe data from and disable computers and networks. Administrators worked to isolate the malware and replace the affected computers, preventing potential disruption.”

The UK government confirmed their prior assessments that many of the aforementioned attacks had been the work of the Russian GRU.

Sandworm Team (aka “Telebots,” “Voodoo Bear,” “Iron Viking,” and “BlackEnergy”) is the group behind many conspicuous attacks in the last half a decade, the DoJ claims, all allegedly performed under the aegis of the Russian government.

The six alleged Sandworm Team hackers against which the indictments have been brought were responsible for a variety of tasks: 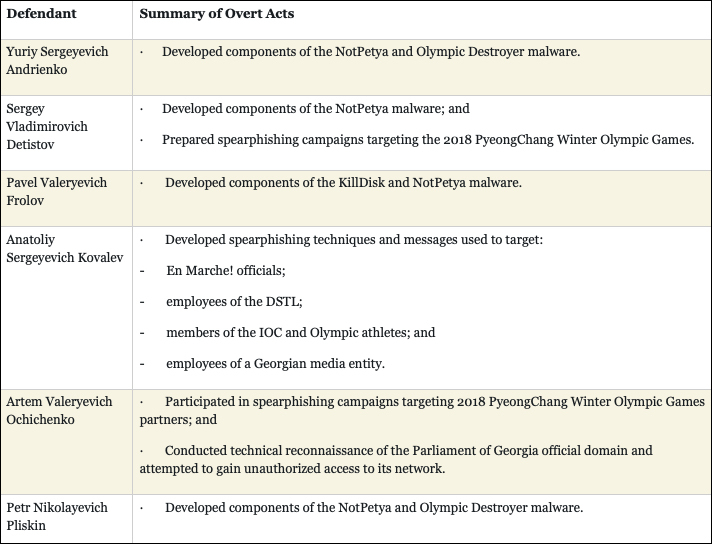 One of them, Anatoliy Kovalev, has been previously charged by a US court “with conspiring to gain unauthorized access into the computers of US persons and entities involved in the administration of the 2016 US elections,” the DoJ noted.

The US investigation into the group has lasted for several years, and had help from Ukrainian authorities, the Governments of the Republic of Korea and New Zealand, Georgian authorities, and the United Kingdom’s intelligence services, victims, and several IT and IT security companies.

Political and other ramifications

Warrants for the arrest of the six alleged Sandworm Team members have been drawn, but chances are slim-to-nonexistent that arrests will be performed in the near or far future.

The Russian government’s official position is that the accusations are unbased and part of an “information war against Russia”.

Russia starts responding to "accusations" of hacking operations. Chairman of the State Parliament committee on international affairs Dmitry Novikov says this is part of "information war against Russia". https://t.co/ifSuCM23VN

It’s unusual to see the US mount criminal charges against intelligence officers that were engaged in cyber-espionage operations outside the US, but the rationale here is that many of the attacks resulted in real-world consequences that were aimed at undermining the target countries’ governments and destabilizing the countries themselves, and that they affected individuals, civilian critical infrastructure (including organizations in the US), and private sector companies.

“The crimes committed by Russian government officials were against real victims who suffered real harm. We have an obligation to hold accountable those who commit crimes – no matter where they reside and no matter for whom they work – in order to seek justice on behalf of these victims,” commented US Attorney Scott W. Brady for the Western District of Pennsylvania.

There are currently no laws and norms regulating cyber attacks and cyber espionage in peacetime, but earlier this year Russian Federation president Vladimir Putin called for an agreement between Russia and the US that would guarantee the two nations would not try to meddle with each other’s elections and internal affairs via “cyber” means.

This latest round of indictments by the US is unlikely to act as a deterrent but, as Dr. Panayotis Yannakogeorgos recently told Help Net Security, indictments and public attribution of attacks serve several other purposes.

Another interesting result of this indictment may be felt by insurance companies and their customers that have suffered disruption due to cyber attacks mounted by nation-states. Some of their insurance policies may not cover cyber incidents that could be considered an “act of war” (e.g., the NotPetya attacks).