As people around the world increasingly get their news from social media, online misinformation has emerged as an area of great concern. 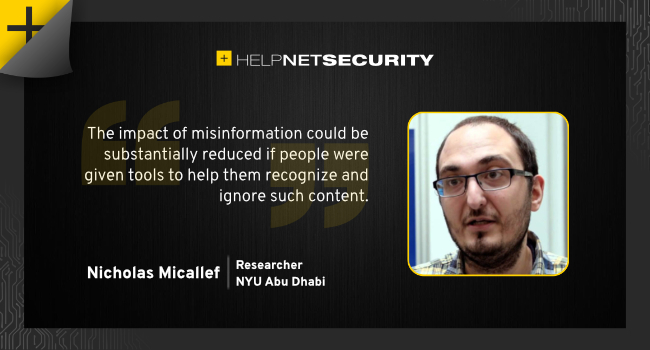 To improve news literacy and reduce the spread of misinformation, NYUAD Center for Cybersecurity researcher and lead author Nicholas Micallef is part of a team that designed Fakey, a game that emulates a social media news feed and prompts players to use available signals to recognize and scrutinize suspicious content and focus on credible information. Players can share, like, or fact-check individual articles.

Micallef and his colleagues Mihai Avram, Filippo Menczer, and Sameer Patil from the Luddy School of Informatics, Computing, and Engineering, Indiana University, present the analysis of interactions with Fakey, which was released to the general public as a web and mobile app with data procured after 19 months of use.

The researchers found that the more players interacted with articles in the game, the better their skills at spotting credible content became. However, playing the game did not affect players’ ability to recognize questionable content.

Further research will help determine how much gameplay would be necessary to be able to distinguish between legitimate and questionable content.

Games like Fakey could be offered as a tool to social media users. For example, social media platforms could conduct regular exercises (akin to ‘phishing drills’ used in organizations for employee security training) wherein users practice identifying questionable articles. Or, the researchers say, such games could be integrated into media literacy curricula in schools.

“The impact of misinformation could be substantially reduced if people were given tools to help them recognize and ignore such content,” said Micallef.

“The principles and mechanisms used by Fakey can inform the design of social media functionality in a way that empowers people to distinguish between credible and fake content in their news feeds and increase their digital literacy.”