Zscaler released a report on the state of corporate attack surfaces. Based on data sourced between February 2020 and April 2021, the report provides a first-ever look at the impact of attack surface exposure during the pandemic. 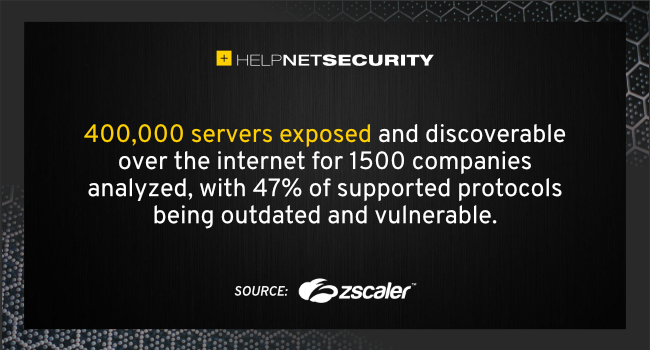 “The sheer amount of information that is being shared today is concerning because it is all essentially an attack surface,” said Nathan Howe, VP, Emerging Technology at Zscaler. “Anything that can be accessed can be exploited by unauthorized or malicious users, creating new risks for businesses that don’t have complete awareness and control of their network exposure.”

While attack surface vulnerabilities impact organizations of all sizes, major international companies with more than 20,000 employees are more vulnerable due to their distributed workforce, infrastructure, and greater number of applications that need to be managed.

The report found that while 59 percent of surveyed organizations were based in the Americas, the EMEA region led the world in overall exposure and potential risk, with 164 CVE vulnerabilities. EMEA-based businesses had the most exposed servers, with an average of 283 exposed servers and 52 exposed public cloud instances each. They were also more likely to support outdated SSL/TLS protocols and had greater risk of CVE vulnerabilities on average.

While the report demonstrated that EMEA businesses had the most online exposure, all regions showed vulnerabilities, making it critical for IT teams to adopt best practices, including zero trust security, to minimize the attack surface and eliminate exposure no matter where they are based.

In addition to presenting geographic data, the report tracked corporate attack surfaces by industry, pinpointing the types of organizations most likely to be targeted by cybercriminals. The report analyzed a diverse group of companies, spanning 23 different industries, and found that telecommunications organizations were the most vulnerable and had the highest average number of outdated protocols in their servers.

Telecom companies had the third highest average of exposed servers to the internet, increasing the risk of being targeted by cybercriminals for DDoS and double extortion ransomware attacks.

The report also showed that the hospitality industry – including restaurants, bars, and food service vendors – had the highest average of exposed servers and public cloud instances; with AWS instances exposed 2.9 times more often than any other cloud providers. With the COVID-19 pandemic pushing many restaurants to offer online ordering, the rapid adoption of digital payment systems has increased risks for both businesses and customers.

With the number of cyberattacks increasing daily, business IT teams must minimize their attack surface as part of an overall organizational security policy.

Without comprehensive security measures, such as a zero-trust model, digital transformation initiatives and cloud migration efforts can also create new vectors of attack and threaten business continuity, professional reputation, and employee safety. Although no approach will be completely effective, here are some tips for minimizing corporate network risks: