From January 2019 through June 2019, LexisNexis Risk Solutions recorded 16.4 billion transactions, of which 277 million were human-initiated attacks, a 13% increase over the second half of 2018.

The report highlights a shift toward networked, cross-organizational and cross-industry fraud, and gives insight into the evolution of bot attacks targeting new accounts in media and e-commerce.

Cybercrime networks emerge when digital identities are associated with confirmed fraud attempts across more than one organization in the Digital Identity Network. Organizations within the same industry, particularly banking, lending and stock brokerage, are most acutely affected.

The new report details one example of how the Digital Identity Network tracked one specific a fraudster across three industries and six different organizations (several financial services organizations, a media streaming company and a credit reporting agency) as the fraudster attempted to create new accounts, initiate repeated login attempts and make fraudulent payments in an effort to monetize stolen credentials, launder money and abuse bonus incentives.

Within media, for example, bot attacks targeting new account creations saw a 65% increase in just six months; The Digital Identity Network revealed a number of bonus abuse attempts where fraudsters attempted to sign up for a number of new accounts in order to capitalize on free trials and streaming bonuses to sell for profit. 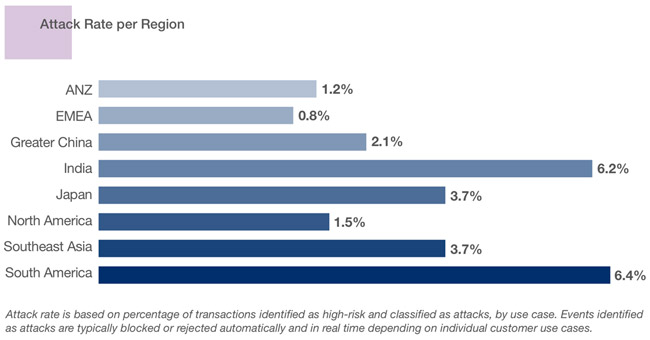 This provides fraudsters with a wealth of personal information and bank account access. Globally, attacks on mobile apps rose 148% in six months and are skewed towards media organizations, particularly social media and gaming/gambling organizations, where bad actors register for new player bonuses to sell for profit.

“Fraudsters no longer operate in silos, they are attacking across industries and organizations,” said Rebekah Moody, director of fraud and identity at LexisNexis Risk Solutions.

“As seen by a detailed example in the report, one fraudster can carry out a large number of transactions against a series of global organizations using a single mobile device.”

“In the end, corporations benefit the most when fraud defense platforms include a multilayered approach that comprise digital identity intelligence, physical identity and authentication capabilities,” continued Moody.

“This approach, when executable in near real- time and touching the entire customer journey, extends beyond detecting complex fraud – it also allows for more streamlined regulatory compliance processes and reduces friction across the customer experience.”