Group-IB has presented a report which examines key shifts in the cybercrime world internationally between H2 2019 and H1 2020 and gives forecasts for the coming year. The most severe financial damage has occurred as a result of ransomware activity. 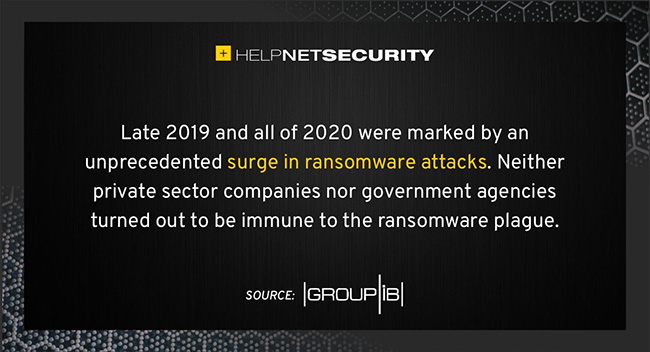 The past year — a harrowing period for the world economy — culminated in the spike of cybercrime. It was also marked by the rise of the underground market for selling access to corporate networks and an over two-fold growth of the carding market. The stand-off between various pro-government hacker groups saw new players come onto the scene, while some previously known groups resumed their operations.

The cost of ransomware

Late 2019 and all of 2020 were marked by an unprecedented surge in ransomware attacks. Neither private sector companies nor government agencies turned out to be immune to the ransomware plague.

Over the reporting period, more than 500 successful ransomware attacks in more than 45 countries were reported. Since attackers are motivated by financial gain alone, any company regardless of size and industry could fall victim to ransomware attacks.

Meanwhile, if the necessary technical toolsets and data restoring capabilities are not in place, ransomware attacks could not only cause downtime in manufacturing but also bring operations to a standstill.

According to conservative estimates, the total financial damage from ransomware operations amounted to over $1 billion ($1,005,186,000), but the actual damage is likely to be much higher. Victims often remain silent about incidents and pay ransoms quietly, while attackers do not always publish data from compromised networks.

A major ransomware outbreak was detected in the United States, with the country accounting for about 60% of all known incidents. The US is followed by European countries (mainly the UK, France, and Germany), which together make up roughly 20% of all ransomware attacks.

Countries of North and South America (excluding the US) are at 10% and Asian states are at 7%. The top five most frequently attacked industries include manufacturing (94 victims), retail (51 victims), state agencies (39 victims), healthcare (38 victims), and construction (30 victims).

Maze and REvil are considered to have the largest appetite: the operators of these two strains are believed to be behind more than half of all successful attacks. Ryuk, NetWalker, and DoppelPaymer come second.

The ransomware pandemic was triggered by an active development of private and public affiliate programs that bring together ransomware operators and cybercriminals involved in compromising corporate networks.

Another reason for an increase in ransomware attacks is that traditional security solutions, still widely used by a lot of companies on the market, very often fail to detect and block ransomware activity at early stages.

Ransomware operators buy access and then encrypt devices on the network. After receiving the ransom from the victim, they pay a fixed rate to their partners under the affiliate program.

The main ways to gain access to corporate networks include brute-force attacks on remote access interfaces (RDP, SSH, VPN), malware (e.g., downloaders), and new types of botnets (brute-force botnets). The latter are used for distributed brute-force attacks from a large number of infected devices, including servers.

In late 2019, ransomware operators adopted a new technique. They began downloading all the information from victim organizations and then blackmailed them to increase the chances of the ransom being paid.

Maze (who allegedly called it quits not long ago) pioneered the tactic of publishing sensitive data as leverage to extort money. If a victim refuses to pay the ransom, they risk not only losing all their data but also having it leaked. In June 2020, REvil started auctioning stolen data.

Military operations conducted by various intelligence services are becoming increasingly common. A continuing trend was identified, where physical destruction of infrastructure is replacing espionage. Attacker toolkits are being updated with instruments intended for attacks on air-gapped networks.

The nuclear industry is turning into the number one target for state-sponsored threat actors. Unlike the previous reporting period, during which no attacks were observed, the current one was marked by attacks on nuclear energy facilities in Iran and India.

A blatant attack was attempted in Israel, where threat actors gained access to some of Israel’s water treatment systems and tried altering water chlorine levels. Had it been successful, the attack would have led to water shortages or even civilian casualties.

State-sponsored APT groups are not losing interest in the telecommunications sector. Over the review period, it was targeted by at least 11 groups affiliated with intelligence services. Threat actors’ main goals remain spying on telecommunications operators or attempts to disable infrastructure.

Threat actors have also set a new record in DDoS attack power: 2.3 Tb per second and 809 million packets per second. BGP hijacking and route leaks remain a serious problem as well. Over the past year, nine significant cases have been made public.

Most state-sponsored threat actors originate from China (23), followed by Iran (8 APT groups), North Korea and Russia (4 APT groups each), India (3), and Pakistan and Gaza (2 each). South Korea, Turkey, and Vietnam are reported to have only one APT group each.

According to data analyzed, Asia-Pacific became the most actively attacked region by state-sponsored threat actors. A total of 34 campaigns were carried out in this region, and APT groups from China, North Korea, Iran, and Pakistan were the most active.

At least 22 campaigns were recorded on the European continent, with attacks carried out by APT groups from China, Pakistan, Russia, and Iran. Middle East and Africa were the scene of 18 campaigns conducted by pro-government attackers from Iran, Pakistan, Turkey, China, and Gaza.

Sales of access to compromised corporate networks have been increasing from year to year and peaked in 2020. It is difficult to assess the size of the market for selling access, however, as offers published on underground forums often do not include the price, while some deals are cut in private.

Nevertheless, technologies for monitoring underground forums (which make it possible to see deleted and hidden posts) helped the experts assess the total market size for access sold in the review period (H2 2019 to H1 2020): $6.2 million. This is a four-fold increase compared to the previous review period (H2 2018 to H1 2019), when it totaled $1.6 million.

Surprisingly, state-sponsored attackers joined this segment of the cybercriminal market seeking additional revenue. As such, in the summer of 2020, on an underground forum a seller offered access to several networks, including some belonging to US government departments, defense contractors (Airbus, Boeing, etc.), IT giants, and media companies. The cost of the access to the companies listed was close to $5 million.

In H1 2020 alone, 277 offers of access to corporate networks were put up for sale on underground forums. The number of sellers has also grown. During that period, 63 sellers were active, and 52 of them began selling access in 2020.

For comparison, during all of 2018, only 37 access sellers were active, while in 2019 there were 50 sellers who offered access to 130 corporate networks. In total, the sales of corporate network access grew by 162% compared to the previous period (138 offers against 362).

After analyzing offers of access to corporate networks, experts found correlations with ransomware attacks: most threat actors offered access to US companies (27%), while manufacturing was the most frequently attacked industry in 2019 (10.5%). In 2020, access to state agency networks (10.5%), educational institutions (10.5%), and IT companies (9%) was high in demand.

It should be noted that sellers of access to corporate networks increasingly rarely mention company names, their geographical location and industry, which makes it almost impossible to identify the victim without contacting the attackers.

Selling access to a company’s network is usually only one stage of the attack: the privileges gained might be used for both launching ransomware and stealing data, with the aim of later selling it on underground forums or spying.

Over the review period, the carding market grew by 116%, from $880 million to $1.9 billion. The quick growth applies to both textual data (bank card numbers, expiration dates, holder names, addresses, CVVs) and dumps (magnetic stripe data). The amount of textual data offered for sale increased by 133%, from 12.5 to 28.3 million cards, while dumps surged by 55%, from 41 to 63.7 million. The maximum price for card textual data is $150 and $500 for a dump.

Dumps are mainly obtained by infecting computers with connected POS terminals with special Trojans and thereby collecting data from random-access memory. Over the review period, 14 Trojans used for collecting dumps were found to be active.

Cybercriminals seek to obtain data relating to credit and debit cards issued by US banks: these account for over 92% of all compromised bank cards. Bank card data of bank customers in India and South Korea are the second and third most desirable targets for cybercriminals. Over the review period, the total price of all the bank card dumps offered for sale amounted to $1.5 billion, while textual data – to $361.7 million.

Textual data is collected through phishing websites and PC/Android banking Trojans, by compromising e-commerce websites, and by using JS sniffers. The latter were one of the main instruments for stealing large amounts of payment data over the past year. JS sniffers also became more popular in light of the trend of reselling access to various websites and organizations on underground forums.

Group-IB is currently monitoring the activities of 96 JS sniffer families. This is a 2.5-fold increase compared to the previous reporting period, during which there were 38 families on the company’s radar. According to the findings, over the past year nearly 460,000 bank cards were compromised using JS sniffers.

The threat of bank card data leaks is most acute for retail companies that have online sales channels, e-commerce companies that offer goods and services online, and banks that unwittingly become involved in incidents.

The main scenarios for illegally harvesting bank card data and most frequently attacked countries (the United States, India, South Korea) will remain the same. Latin America might become an increasingly attractive target for carders since it already has mature hacker community experienced in using Trojans for this purpose.

Between H2 2019 and H1 2020, the number of phishing web resources found and blocked rose by 118% compared to the previous reporting period. Analysts mention the global pandemic and lockdowns as the main reasons: web-phishing, which is one of the simplest ways to earn money in the cybercriminal industry, attracted those who lost their incomes.

The increased demand for online purchases created a favorable environment for phishers. They quickly adapted to this trend and began carrying out phishing attacks on services and individual brands that previously did not have much financial appeal to them.

Scammers also changed their tactics. In previous years, attackers ended their campaigns after fraudulent websites were taken down and quickly switched to other brands. Today, they are automating their attacks instead and replacing the blocked pages with new ones.

Since the start of the year, there has been a rise in advanced social engineering, namely when multi-stage scenarios are used in phishing attacks. As part of such increasingly popular phishing schemes, threat actors first stake out the victim. They establish contact with the targeted individual (e.g., through a messenger), create an atmosphere of trust, and only then do they direct the victim to a phishing page.

One-time links turned out to be another phishing trend of the past year. After a user receives a link and clicks on it at least once, it will not be possible to obtain the same content again in order to collect evidence. This significantly complicates the process of taking down phishing resources.