A LexisNexis Risk Solutions report tracks global cybercrime activity from January 2020 through June 2020. The period has seen strong transaction volume growth compared to 2019 but an overall decline in global attack volume. This is likely linked to growth in genuine customer activity due to changing consumer habits. 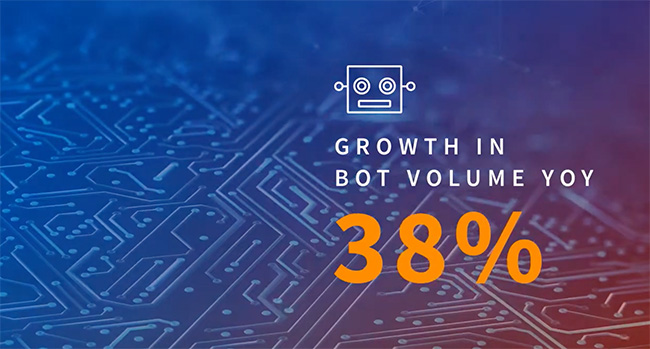 The period has seen strong transaction volume growth compared to 2019 but an overall decline in global attack volume. This is likely linked to growth in genuine customer activity due to changing consumer habits.

The report analyzes data from more than 22.5 billion transactions processed, a 37% growth year over year. Mobile device transactions also continue to rise, with 66% of all transactions coming from mobile devices in the first half of 2020, up from 20% in early 2015.

There’s also an uptick in transactions from new devices and new digital identities. This is attributed to many new-to-digital consumers moving online to procure goods and services that were no longer available in person or harder to access via a physical store, during the pandemic.

The EMEA region saw lower overall attack rates in comparison to most other global regions from January through June 2020. This is due to a high volume of trusted login transactions across relatively mature mobile apps.

The attack patterns in EMEA were also more benign and had less volatility and fewer spikes in attack rates. However, there are some notable exceptions. Desktop transactions conducted from EMEA had a higher attack rate than the global average and automated bot attack volume grew 45% year over year.

The UK originates the highest volume of human-initiated cyberattacks in EMEA, with Germany and France second and third in the region. The UK is also the second largest contributor to global bot attacks behind the U.S.

One example of a UK banking fraud network saw more than $17 million exposed to fraud across 10 financial services organizations. This network alone consisted of 7,800 devices, 5,200 email addresses and 1,000 telephone numbers.

The overall human-initiated attack rate fell through the first half of 2020, showing a 33% decline year over year. The breakdown by sector shows a 23% decline in financial services and a 55% decline in e-commerce attack rates.

Media is the only industry that recorded an overall year over year growth in human-initiated cyberattacks. There was a 3% increase solely across mobile browser transactions.

Across the customer journey

New account creations see attacks at a higher rate than any other transaction type in the online customer journey. However, the largest volume of attacks targets online payments. Login transactions have seen the biggest drop in attack rate in comparison to other use cases.

Analysis across new customer touchpoints in the online journey is included in this report for the first time, providing additional context on key points of risk such as money transfers and password resets. 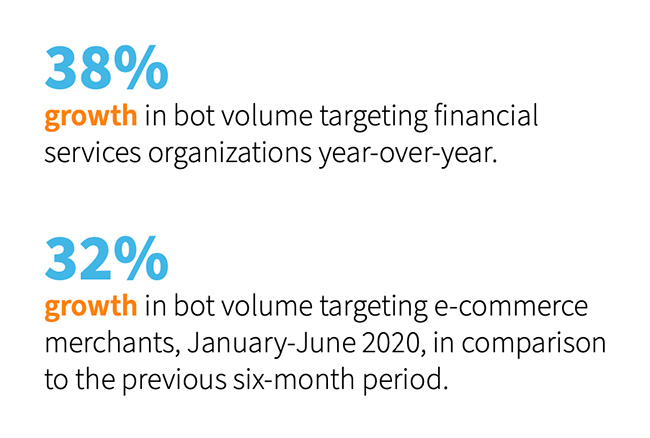 All industries have felt the impact of COVID-19. There are clear peaks and troughs in transaction volumes coinciding with global lockdown periods.

Financial services organizations realized a growth in new-to-digital banking users, a changing geographical footprint from previously well-traveled consumers and a reduction in the number of devices used per customer. There have also been several attacks targeting banks offering COVID-19-related loans.

Rebekah Moody, director of fraud and identity at LexisNexis Risk Solutions, said: “The move to digital, for both businesses and consumers, has been significant. Yet with this change comes opportunity for exploitation. Fraudsters look for easy targets: whether government support packages, new lines of credit or media companies with fewer barriers to entry.”